This drum was made by lovely lady who came to a drum-making workshop here.  She had thought that she would come and watch me make her drum - surely it would be too hard and she would be too weak to make such a wondrous complicated thing as a drum.  When the drum was finished and drying the look of amazement and justifiable pride on her face as she observed the result of our day's potent birthing was fantastic.  She had made every bit of it herself and done a damn fine job.  It looks gorgeous and it sounds gorgeous. She left it here to dry so that it could be painted and asked that Moongazy Hare should be the one to grace the front of her beautiful new creation.

Here he is - the Moongazy Hare - and his beloved, the moon.   You can't see it in the picture but the moon has a silvery sheen.

The hare and the moon are connected in stories from all over the world.  Our own, here in Britain, concern themselves with Eostre; the Goddess associated with the moon and with death, redemption and resurrection, particularly as the year turns toward spring.  Eostre was a divine shape shifter who turned herself into a hare every full moon; hares were sacred to her and were seen to be her messengers. Many witches and wise woman are reputed to have been able to turn themselves into hares by moonlight and in Ireland the ancient Celts had a taboo against eating hare - it was said to be akin to eating your own grandmother.

The year is inexorably turning here.  At a friends recent birthday party we sat round the fire on a peerless starry night and didn't need thermoses and blankets!  There was plenty of wine and very good company. 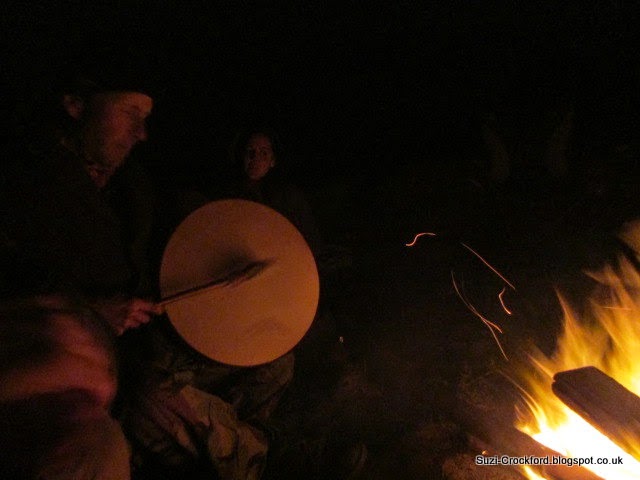 And there were drums (two of them - neither of them mine or Fergus's) both of which had been made at my kitchen table.  It was a lovely feeling to suddenly realize (it seems I'm a bit slow on the uptake) that there are lots of my drums out there in the world - maybe gathering together around fires this very night - sounding out the heartbeat of Mother Earth, calling to the spirits, conjuring rhythm. 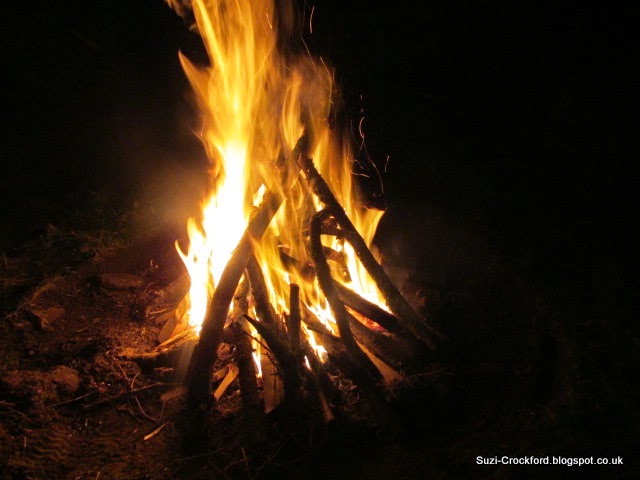 The fire that night was conjured, seemingly out of thin air, by Pete The Lion Tamer. He used a bow drill, a piece of hazel (the drill) and a piece of Cedar (the bearing block) and nurtured the tiniest spark, when he got it, in a little piece of fluffy white Reed Mace nestled in some dried Bracken. It was awe inspiring to behold and seemed to arrive in magically short time, although I'm sure it seemed an eternity to Pete - with us all standing around watching! 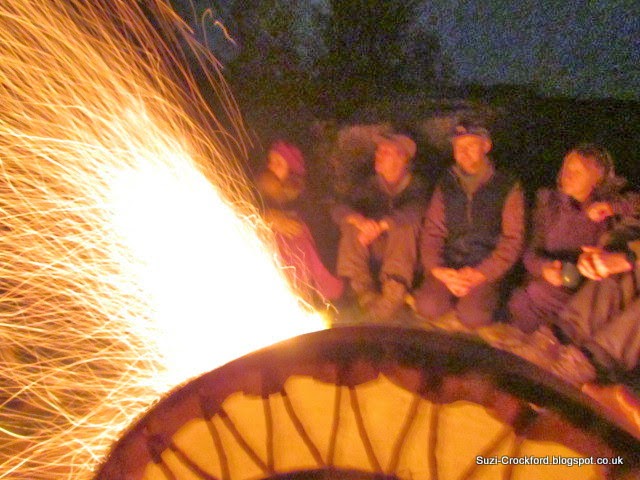 The tiny spark grew, as these things so often do, into a blaze of convivial flame:  Keeping us warm, lighting our circle, accompanying our songs.
Posted by suzi.crockford at 10:30