The boundary between this world and the other usually stands pretty firm, it's crossable if you know the way but most of us are unlikely to stray there by accident. There are clearly doorways, and there are clearly those who know how to open them, or perhaps just to make their way around their closed-ness. 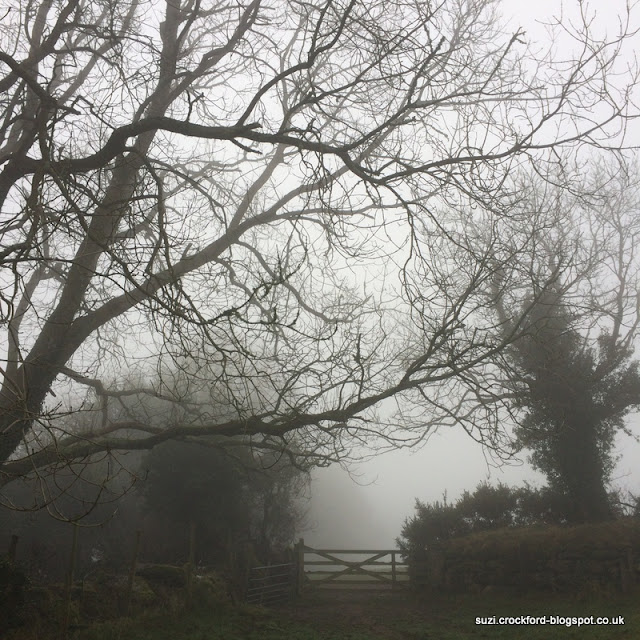 Unless of course it's "one of those days" when the veil is very thin, and who knows when and where you might fall through it. 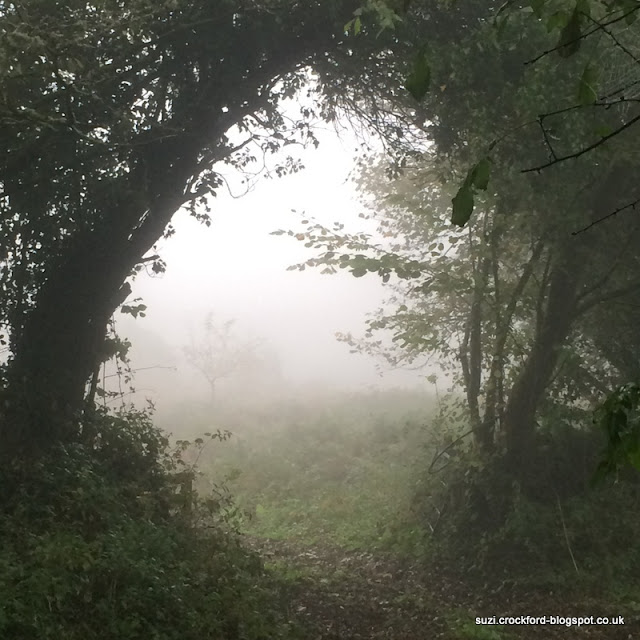 Imbolc is one of those days. One of the four fire celebrations, called Cross Quarter Days, that mark the turning of the year. It is usually said to fall on the 1st of February but to us Celts the day begins at dusk, and therefore all celebrations fall across two days of a modern calendar. This is why the celebrations at Samhuin are at night on the 31st October - that is All Hallows EVE and it is then that the day begins. So Imbolc begins with the setting of the sun of the 31st of January. 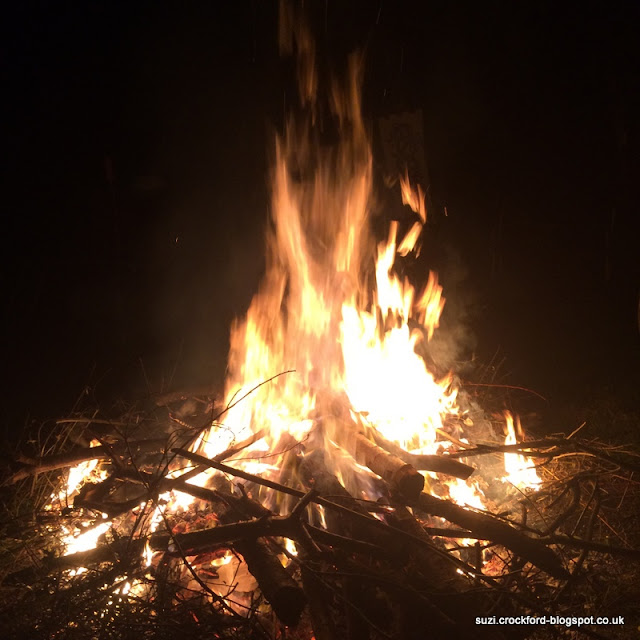 It marks the moment when that wonderful old hag of winter, the Cailleach, makes her way to the magical isle wherein lies the Well of Youth and drinks from it. She turns from Cailleach to Brigit, or Bride/Brid, the Goddess of Spring and Summer. In both Ireland and Scotland there were (and in some places likely still are) ritual processions involving a 'Bride' doll, she represents both Bride herself, either in her incarnation as St Brigit or as The Goddess Bride/Bridey/Brid, and the Sacred Feminine. She processed round the town giving out 'luck' (a way of describing protection) - often in the shape of a Brigit's Cross. This night is the traditional one upon which to make a Brigit's cross and in so doing to ask for her protection. 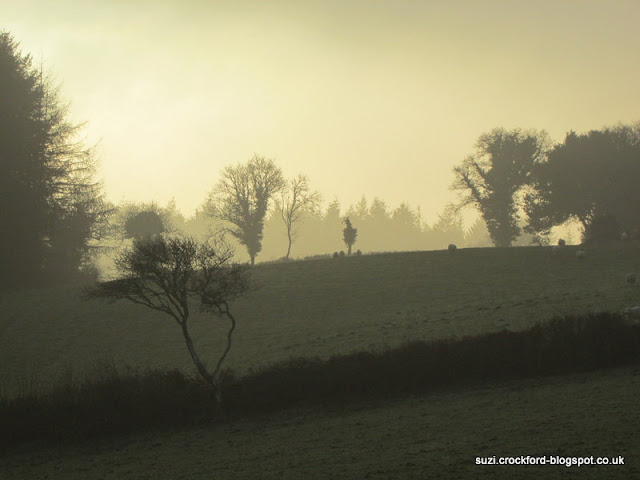 She is patroness of poetry, healing and smithing. She is potent and magical beyond words, her allies are the Raven - first to nest among the birds of these isles, so first to really acknowledge that Spring is here - and Swan, who is white like Brid herself. The white of milk, or purity, of the novice or apprentice. She works with fire and water; the fire or inspiration, purification and of the hearth. The water of healing, of cleansing, and of the holy wells - famous for their oracular maidens as much as for their capacity to quench a thirst of any kind. Her name is the source of the name of Britain. She is Brigantia, Goddess of The Land and therefore of Sovereignty. Her mantle (cloak) is the lush green surface of the land. Her's is the fierce path forwards, the path of the seer. 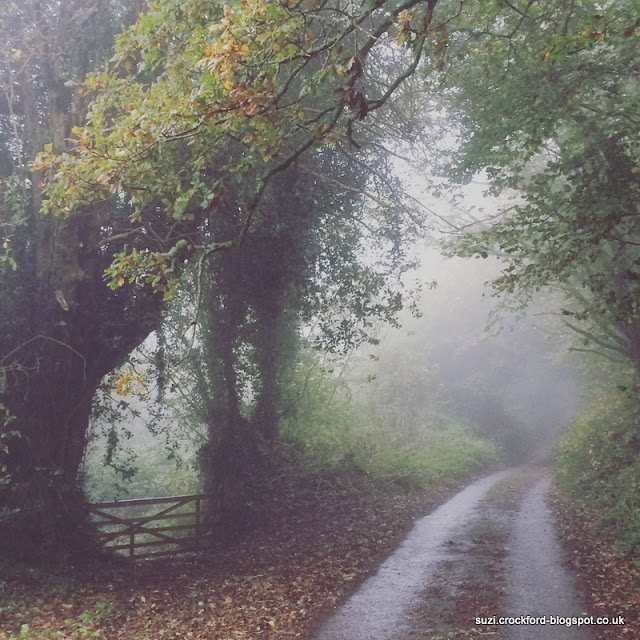 Once the procession is over and everyone has payed their respects the Bride doll is placed in a specially prepared woven 'bed' with a wand. She is the feminine, the wand represents the masculine. Their union in the basket, which is laid in front of the freshly kindled hearth fire, will give birth to all that the household asks for, or it will provide them with omens for how the coming year will be.  You can see my own family's version of this ceremony here. 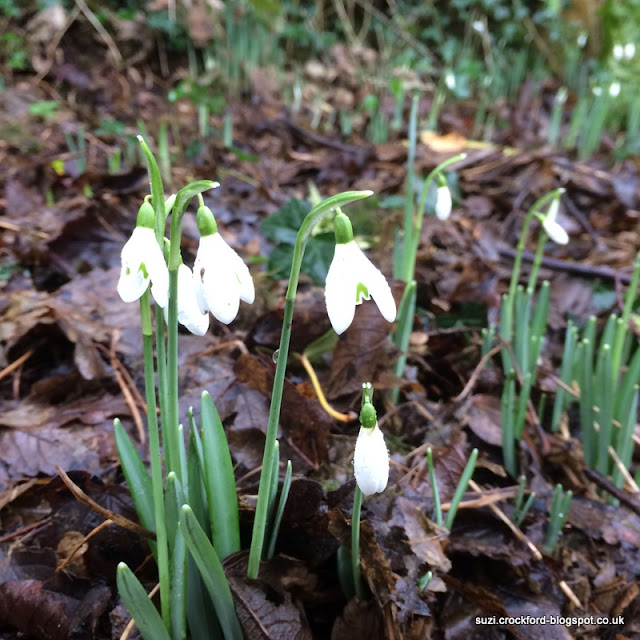 For me, this year, Imbolc is the time to gather sticks. These sticks will be part of what carry my intentions around what will grow this year. Imbolc is the time for planting seeds, not just what we want to grow in the garden, but the seeds of hope for the future, of new adventures. I'm making a new witches broom. Along with the celebration of the coming of spring, of the returning light, of new births in the fields; this is the time for spring cleaning, clearing out all the 'stuff' that has accumulated over winter. 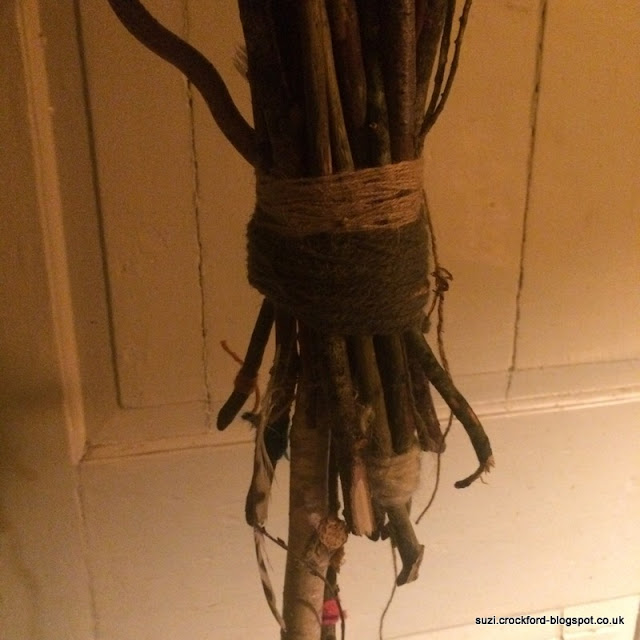 These are not just any old sticks, each stick is gathered to mark my love and respect for one of my 'Allies'. These allies might be in this world or the other; they might be teachers, trusted wise friends, animals, insects, birds, trees, plants, stones, bodies of water, ancestors, dragons, faeries, elves, stories, elemental beings. The list goes on and on - because everything is interwoven in a web of reciprocity, everything is connected. They might have bodies or they might not. You might believe in them or you might not. Each stick is marked in some way so that I know what, or rather whom, it represents. 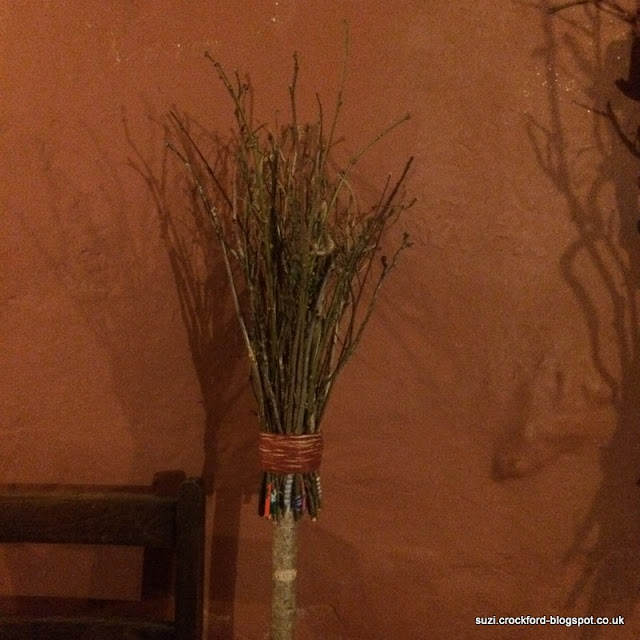 Then I gather a much larger handle stick. There are various traditions around what the length of the stick needs to be, the one I follow is that it must be the same length as your spine - from the tip of your tailbone to the top of your head. If there are any pedants reading this then - yes I know that strictly speaking the spine ends before the head but we're not doing biology here, this is magic. The handle represents not only the spine of the person working with it but also the masculine element. The phallic handle is in balance with the feminine bush (I know, I'm sorry). Where there is no balance there can be no power, so this aspect is important. It is this 'sacred marriage' aspect of the broom that makes it the 'thing that you jump' at a pagan wedding. That and it's associations with fertility because of this very same union. 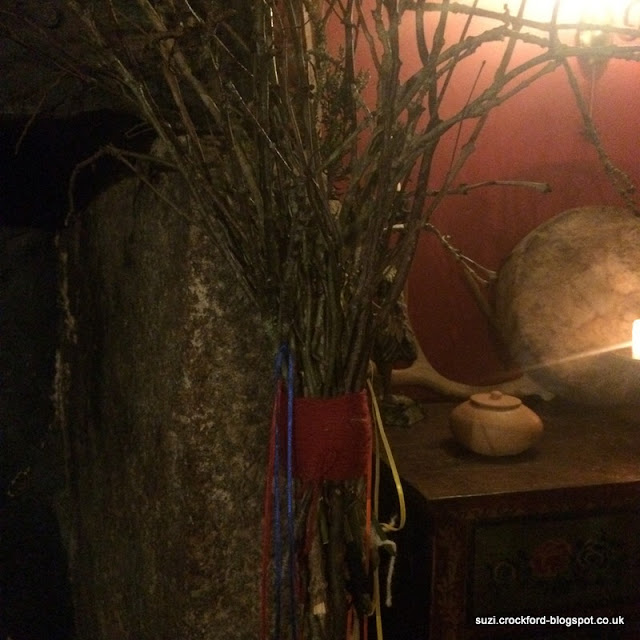 Once all the sticks are gathered then the making can begin. There is much more to it than simply making a 'broom stick'. It is a deeply potent magical act that unites the maker and the made. In it's essence it is both a magical act of protection and a powerful tool. Think of all the things you can do with a broom in this reality - sweeping away that which you do not want, or sweeping in that which you do want being the most obvious! It is a potent carrier of 'intention'.  Placed symbolically into the heart of the broom will be a little bundle of 'me'. This bundle might contain some of my hair, or the saliva from my gypsy's promise to myself (or to The Otherworld). There are one thousand ways in which I might represent myself. Whatever these may be, they are wrapped into the middle of the bundle of sticks, thus symbolically and actually I am surrounded by my allies, my helpers and protectors and on this occasion I am asking them to help me hold a particular intention. 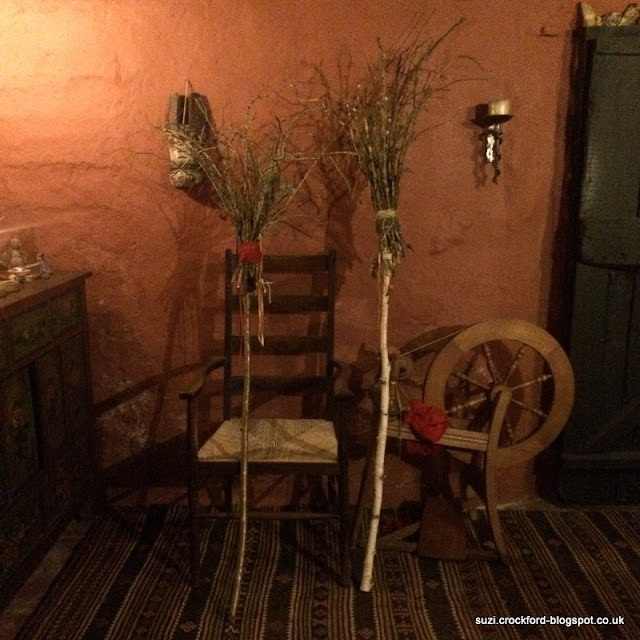 In the days when a woman could be burned for setting a magical intention, what more obvious place to put this work than hidden in plain sight; in a tool that would most likely not be touched by anyone else, not be suspected of being anything other than something to sweep the floor with. Hidden in plain sight has the added advantage of the bundle being able to be a mnemonic device. Each time I look at it I remember that I am surrounded by my allies and that they bring me wisdom and protection. If this was tucked away in a drawer somewhere perhaps I might forget - and magic or not, if we do not give our intention our attention then we are unlikely to carry it out. 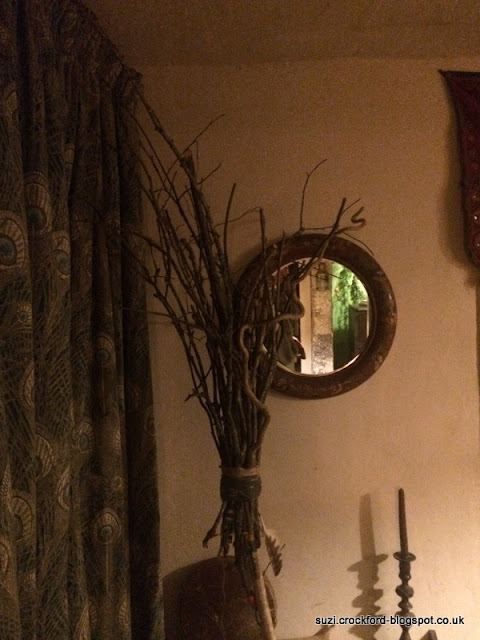 There are traditions around which sticks need to go into a broom. The very word 'broom' comes from a brush being made of the sticks of the Broom bush, which are straight and bouncily resilient.  In Devon this bush is is still called Besom and that kind of sweeping brush is called a besom and a woman who is being witchy (or if I'm being cynical, a woman who is being anything other than subservient to the masculine) is called a besom - usually fondly these days, but I'm very sure it was not always so.  Birch twigs are another traditional brush stick and it's still usual to find brushes made in this style with birch twigs for sweeping outdoors. The handle is traditionally Hazel. 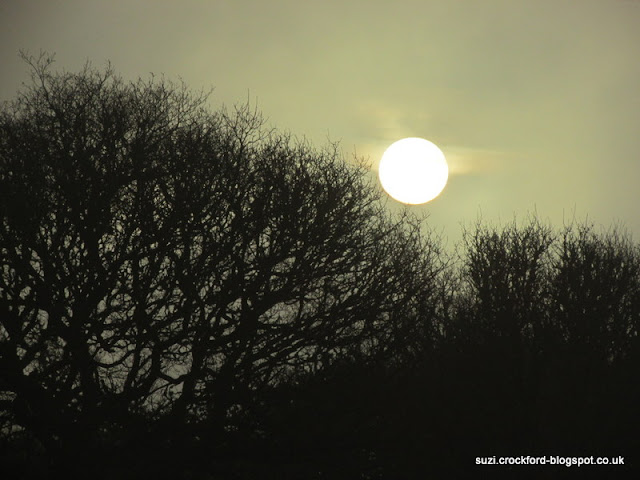 I will be up to greet the dawn at Imbolc. Because I only gather fallen wood my broom will be made from the twigs of many different trees. I will step outside of time and into deep relationship with place and be gifted all the sticks I need from the patch of land within which I live. When I have made my new besom I will treat it with the utmost respect. I will keep it always head up unless I'm using it. I will oil it's handle and speak to it and listen to what it wants. In time it will perhaps become a wise and powerful ally in it's own right. Until then - it will be holding me amongst those I love, and we will be working together to mend the broken relationship between people and planet. 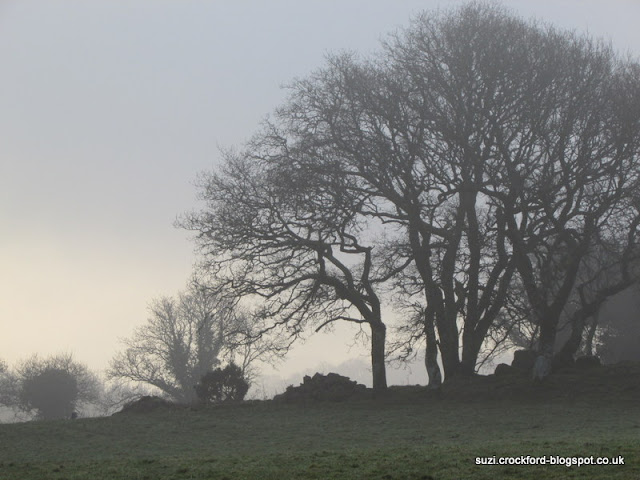 May you live under the protection of Brigit's mantle.