Once upon a time - not much more than a week ago - we walked across fields seeding with clouds of butterflies.  Each step caused Small Heath Butterflies to rise into the air and flutter around us, performing impossible airborne pirouettes and tiny pas de deux before shimmering away. Dogs danced amongst brightly painted wings, enchantment was everywhere and we felt blessed, as if the flying circus was just for us.  Of course I didn't have my camera, but here's a Small Heath from another day. 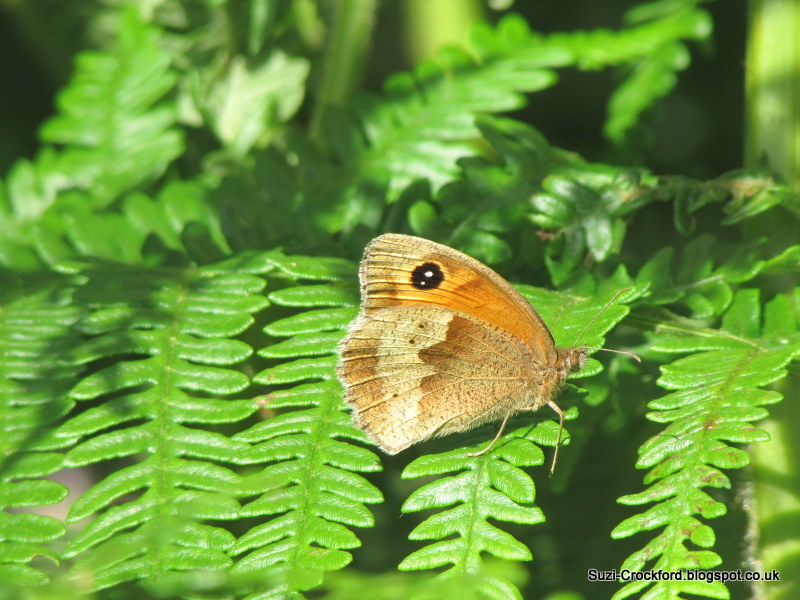 When we got home the lepidoptera flirtations continued.  Four Small Tortoiseshell Butterflies swooped and tumbled through the air, chasing each other in a gorgeous summer game of catch me if you can.  Their dance was so wild and ecstatic, seeming almost bacchanalian in it's abandon that it was almost impossible to photograph, but these stayed still for just long enough. 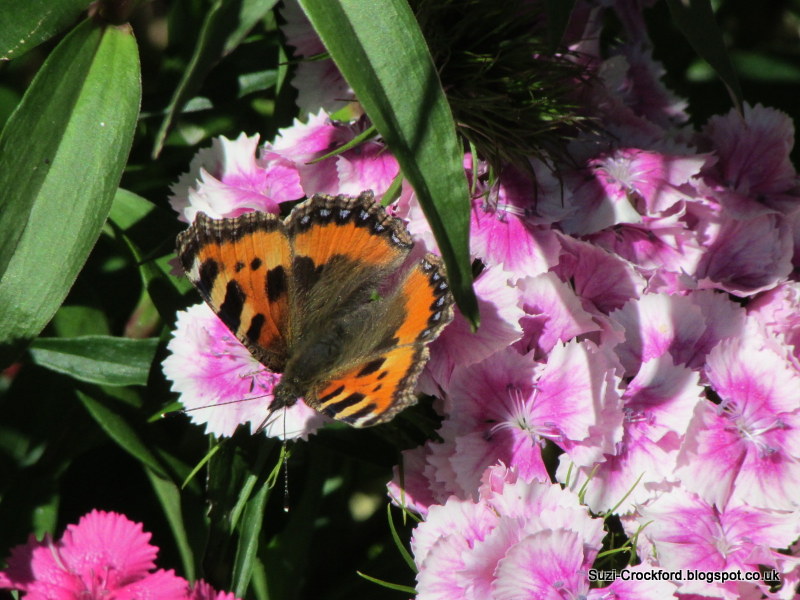 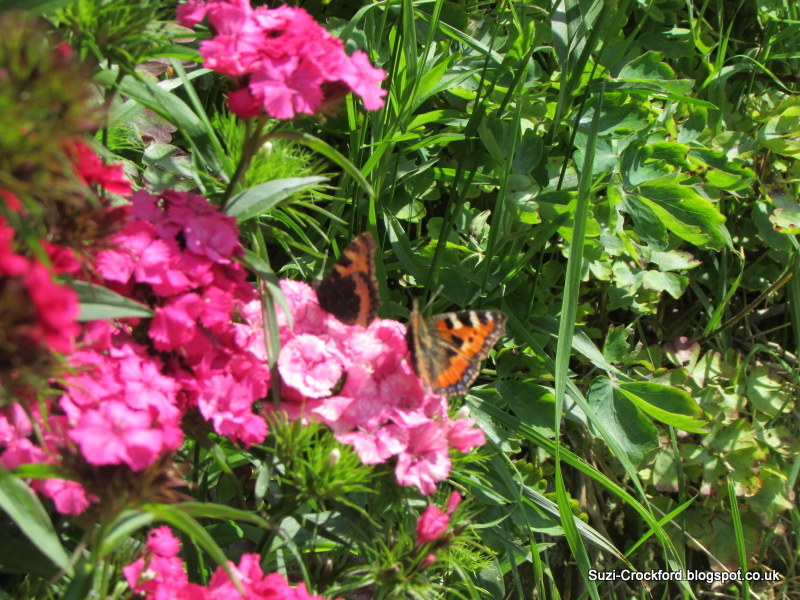 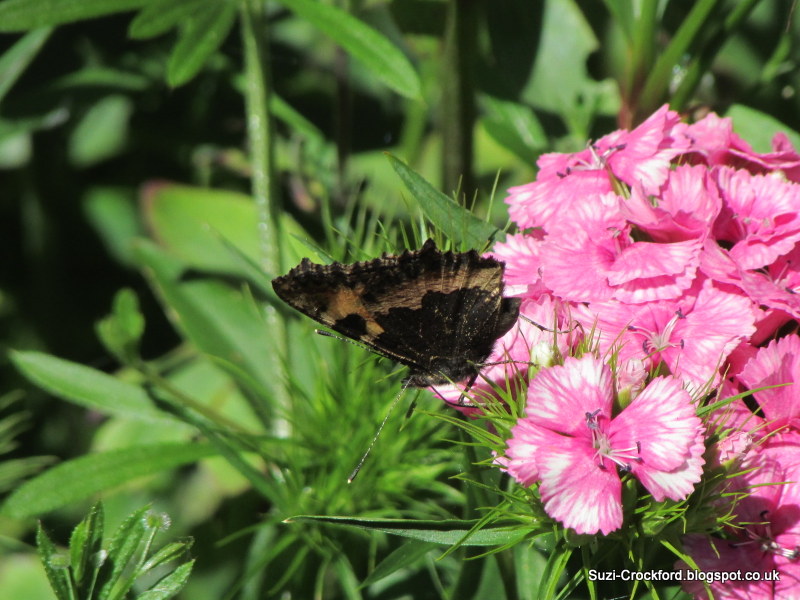 They flew round my head, they landed on my arm, they persuaded me that beyond any doubt they were very very beautiful and rare and special.  And suddenly I saw why they were making so much effort!
In my garden there was a flower, a very lovely pink Mullein flower.  I loved this flower very very much, not just for it's cottage garden beauty, I also loved it because it seemed that the slugs didn't. 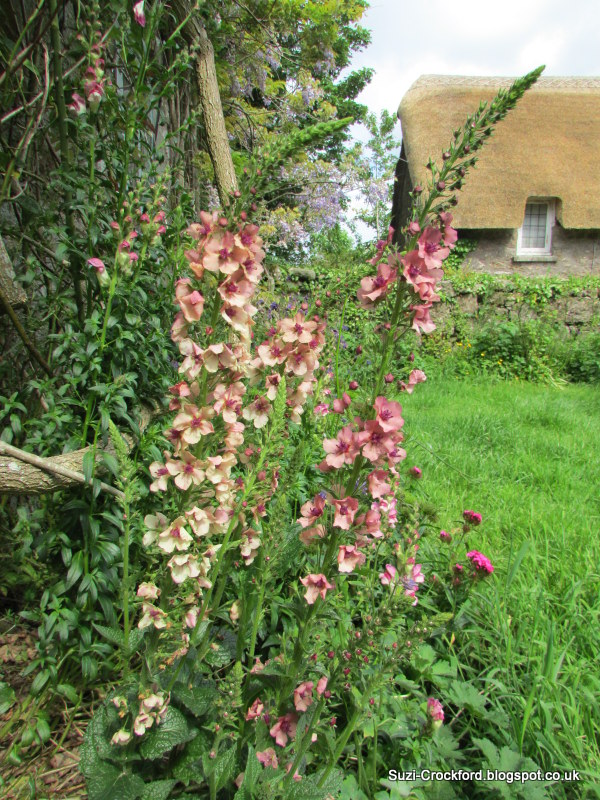 It's flowers sing to my heart and make me smile and it had survived the onslaught of slugs and snails that had decimated every last Larkspur, Lupin and Delphinium that I planted.  I was looking forward to having many more of it as the flowers were starting to turn to seed. 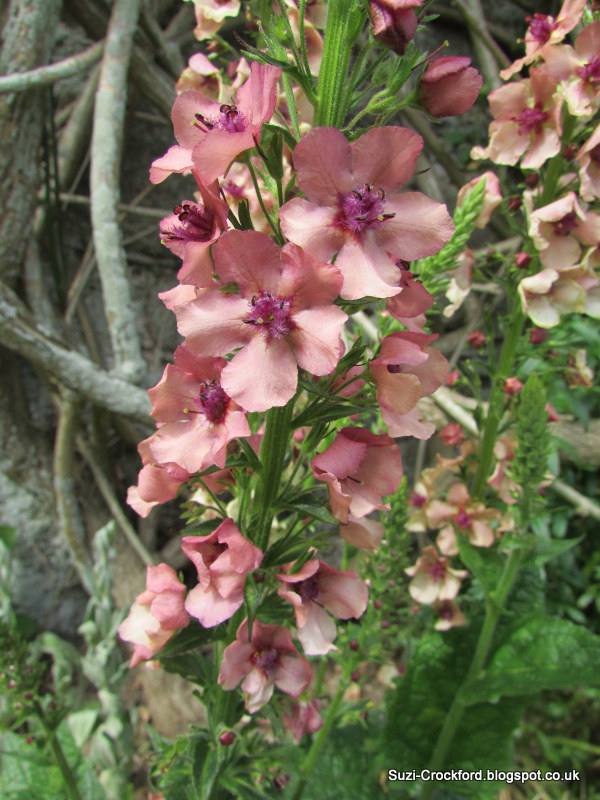 Why were the butterflies flirting?  Here's why... 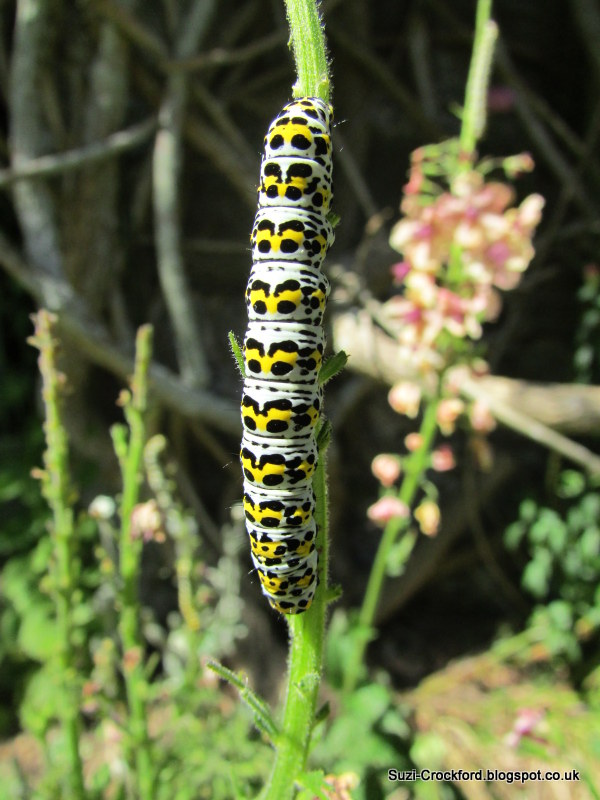 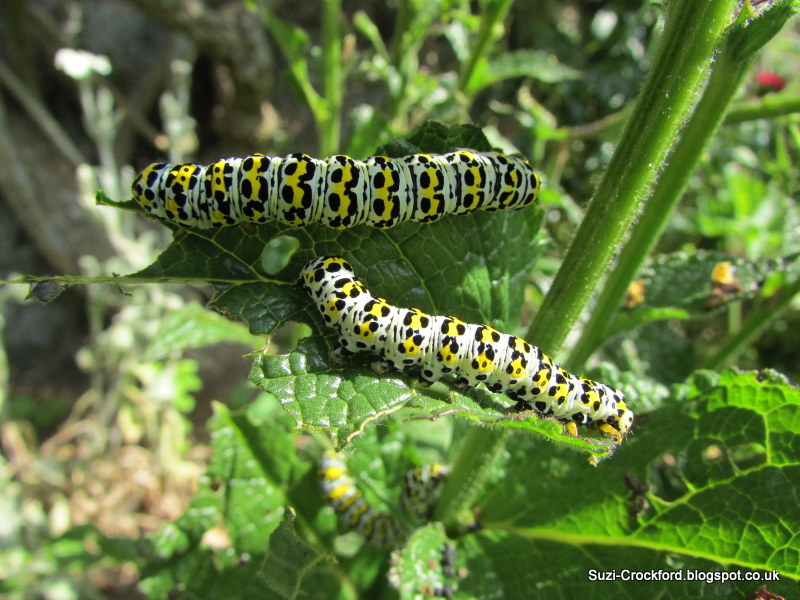 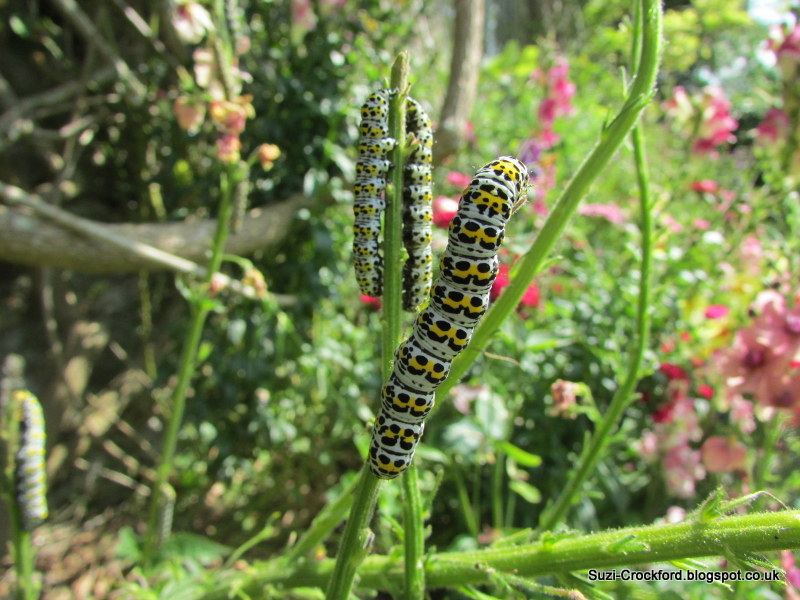 It only took them a couple of days to turn my beautiful flowers into bare sticks. I was sorely tempted to pick them off, but these are the caterpillars of the Mullein Moth, another of natures beauties that isn't as common as it ought to be (or used to be before the advent of pesticides).

Next year I'll know what to do... apparently they are just as happy on Buddleia leaves.  Hurrah! I'm hoping that when they'd quite finished my Mullein they dropped off and made their cocoons in the ground, where they can apparently stay for years before hatching out: but they did all disappear rather abruptly, so it's possible that they went somewhere else entirely. 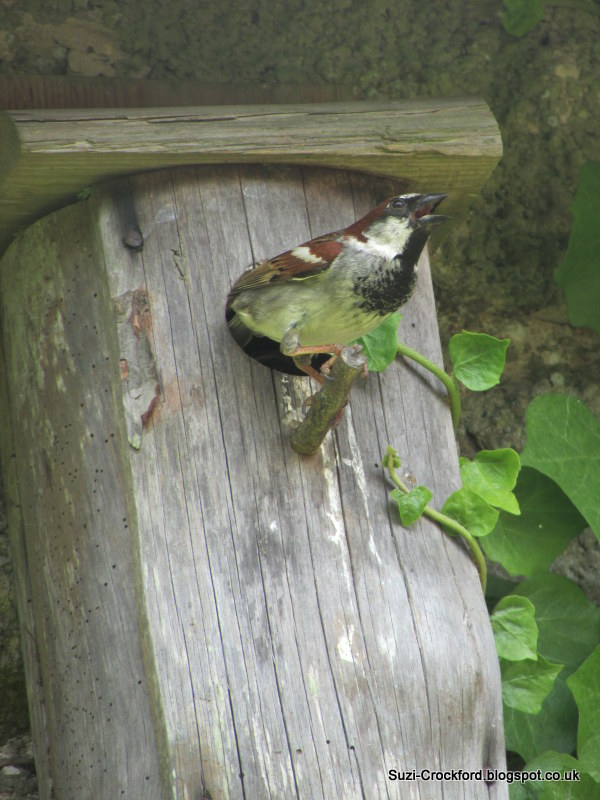 The House Sparrows have been looking pretty smug lately, and they've definitely got lots of chicks. 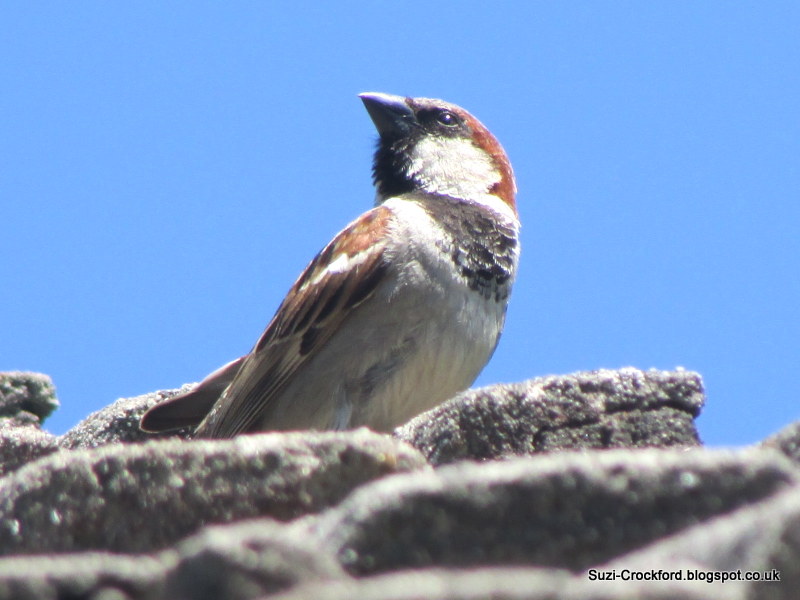 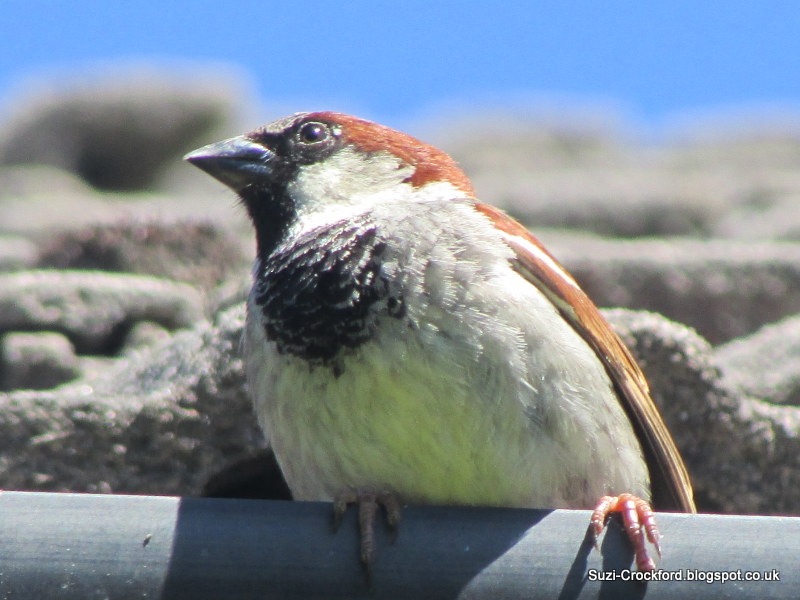 This song has been going round in my head all week. I used to adore it when I was a child and haven't given it a thought for years. Hope you like it too! 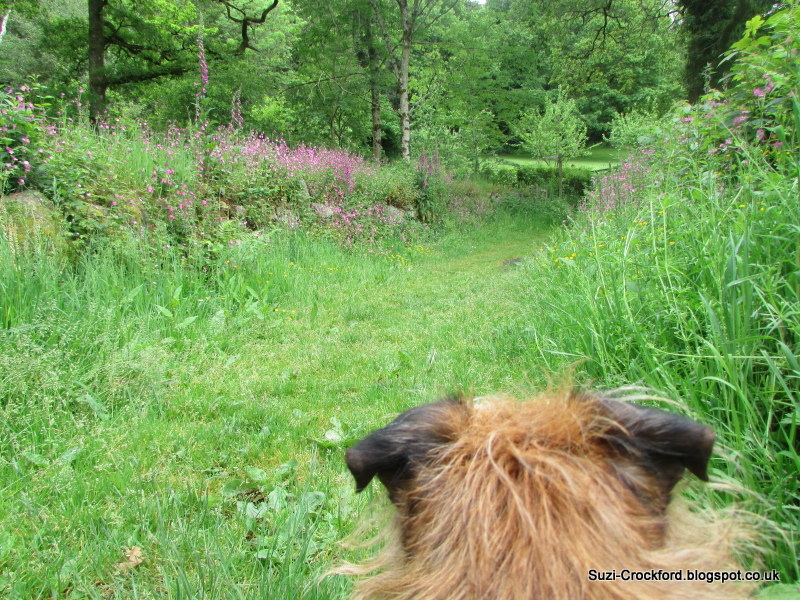 The walk that takes me through fields of butterflies begins in the woods, 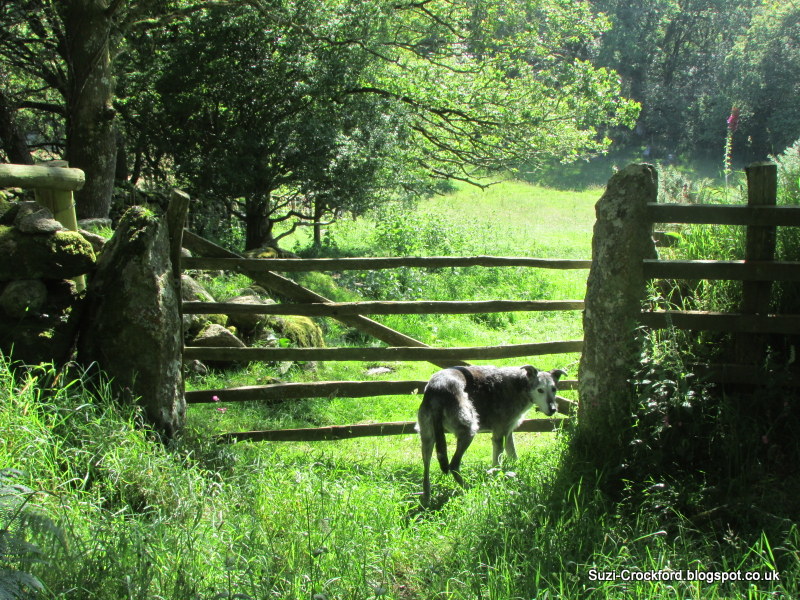 Daisy is always keen to get ahead in case there is something to chase.  Her favorite is rabbit, but for her the fun is in the chase not the catching so she's been known to slow down for young rabbits and even just give up on the ones that jag from side to side rather than running 'away'. 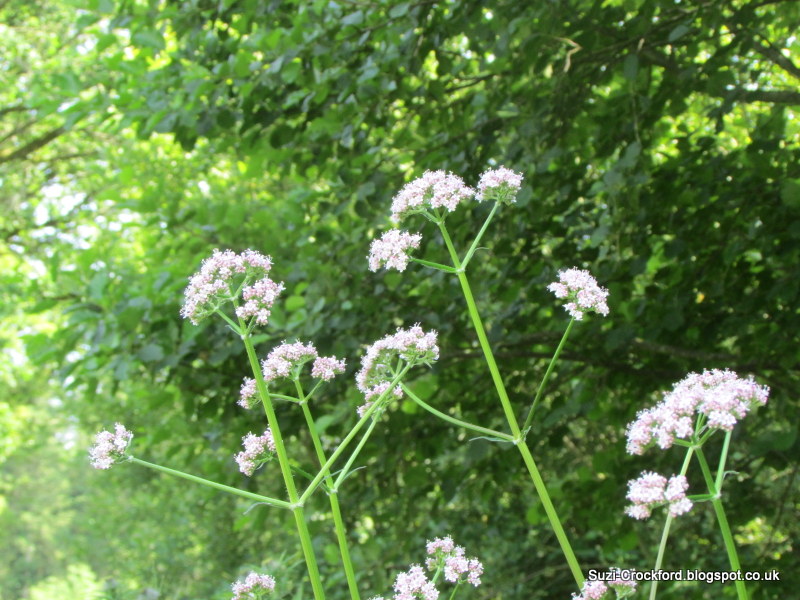 There are still plenty of things to pick in the hedgebanks, I've been drying Valerian for teas (really excellent for insomnia - although  you mustn't have it for too many days in a row), 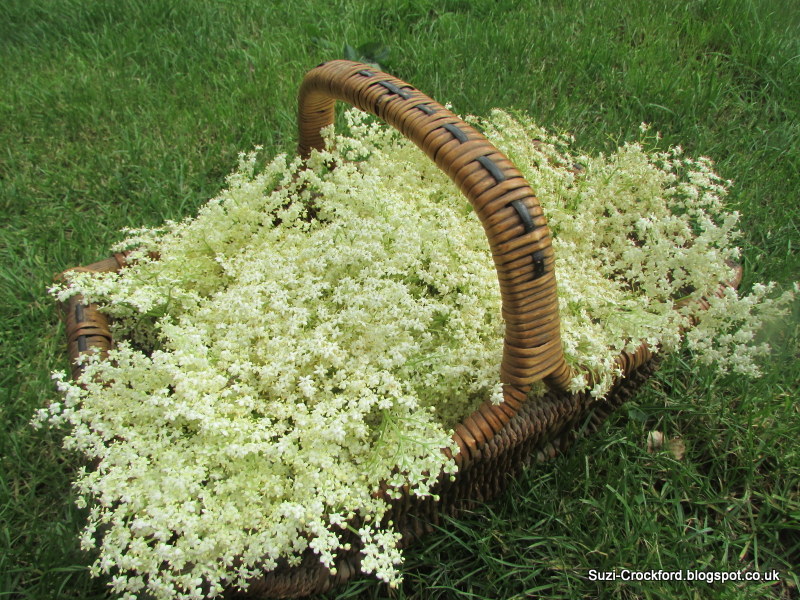 Elderflowers for colds (brilliant for encouraging sweating to break a fever - even better if you add Yarrow too and also useful for cutting congestion and catarrh) and when combined with nettle it's a great Hay Fever remedy. 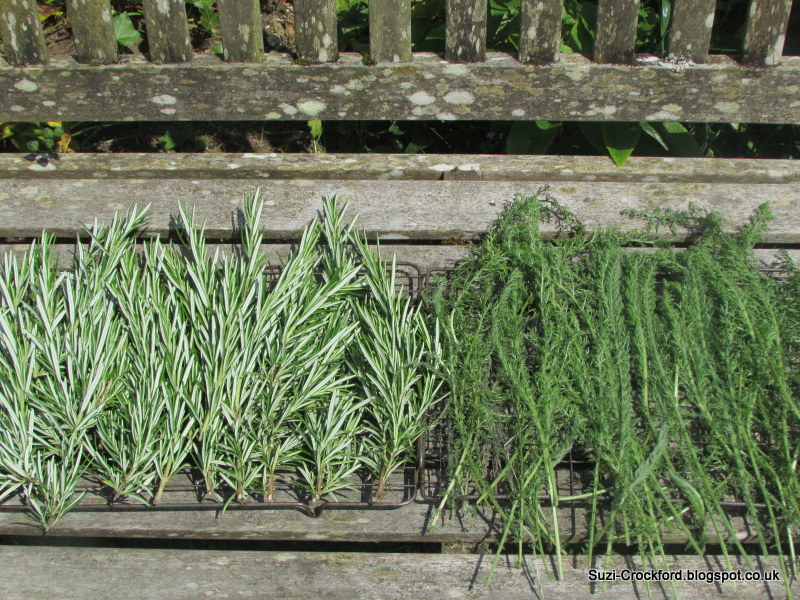 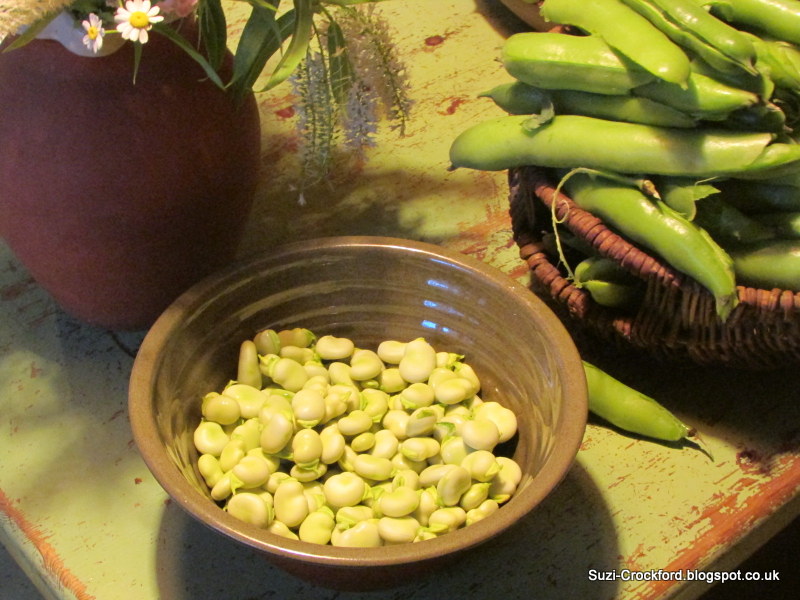 and picked some of the bounties of our garden.  We've had a mountainous haul of broad beans this year.  I love them covered in garlic butter with roasted butternut squash and bacon and pasta.  They are one of my favorite vegetables, not least because their empty pods look like cosy little sleeping bags for faeries, or perhaps for the rapacious caterpillars of the Mullein Moth. 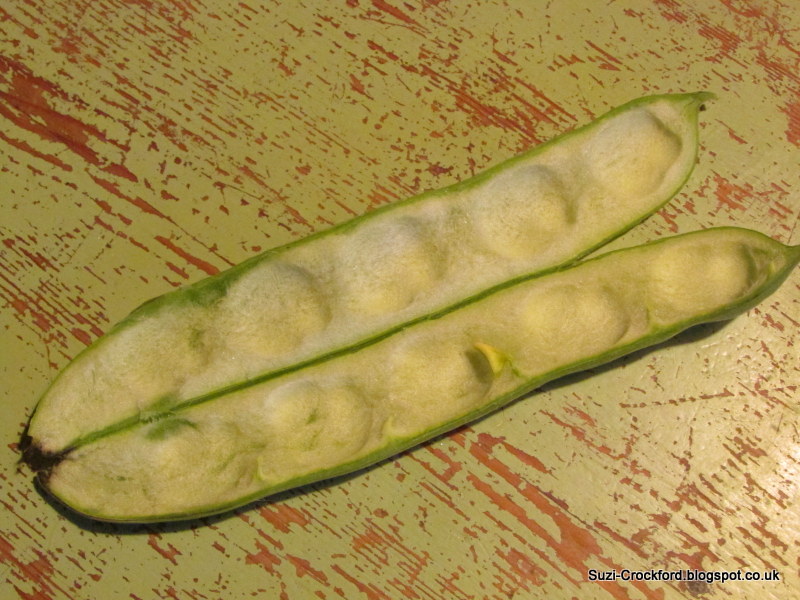